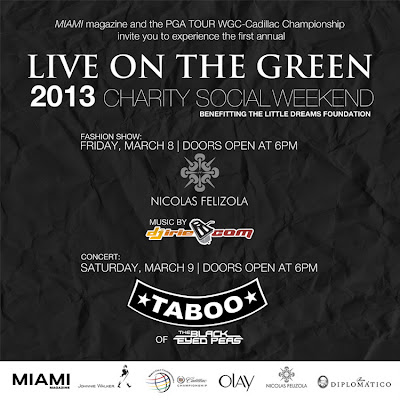 With the World Golf Championships-Cadillac Championship set to return to Trump Doral on March 6-10, the excitement is building as the annual event quickly approaches. This year, the PGA TOUR’s World Golf Championships-Cadillac Championship promises to be a week like no other as it is presenting a first-of-its-kind event with “Live On The Green Charity Social Weekend.” The weekend will be filled with nightly events so that the excitement does not end when the last putt of the tournament drops.

“This event has long been one of the best golf events of each PGA TOUR season. This year, we are looking to broaden our horizons through this event-filled weekend,” said Butch Buchholz, Chairman of the World Golf Championships-Cadillac Championship. “We want fans of all ages, interests and backgrounds to come out and find something they enjoy be it fashion or music.”

The fun will kick off on Friday, March 8,with a fashion show as the Miami Heat’s very own DJ Irie hosts and provides the music for a must-see event featuring the hottest looks for the summer by celebrity designer Nicolas Felizola. Nicolas Felizola has immortalized jet setters and celebrities internationally. He has been featured in various publications as one of the 100 most Outstanding Artists of the 21st Century. Felizola’s total devotion and passion for the Haute Couture style has caused him to be widely honored with multiple prestigious awards, such as the “Best Designer of Miami Fashion Week,” twice awarded by Tiffany & Co. for his Privé and Uomo collections and the “Zanetti Murano Award” in Italy, to name a few.

On Saturday, March 9, the excitement of the entertainment-filled weekend continues with a performance by Taboo of the Black Eyed Peas. Taboo is a multi-platinum American hip hop artist. As a singer, rapper, dancer and DJ that has sold out arenas all over the world, Saturday night’s concert is one that is surely not to be missed as it promises to be a great, high energy performance.

The weeklong tournament and weekend events will raise money to support several local charities. Benefiting from Friday’s fashion show will be the Irie Foundation that seeks to improve the lives of South Florida youth through educational and extracurricular opportunities that may not normally be available to them. On Saturday, the benefiting charity will include the Little Dreams Foundation which seeks to fulfill the dreams of young talent pursuing music, sports and the arts.

Guests not attending the Cadillac Championship may purchase VIP tickets for both the fashion show and concert. For those guests that will be at the Cadillac Championship event throughout the day, a general admission ticket to the weekend events is included. VIP tickets include access to the VIP lounge area sponsored by Miami Magazine with a full open bar provided by Diplomático Rum, Ketel One Vodka, and Johnnie Walker. VIP tickets will also include access to the exclusive after parties that will be held at Bossa Nova.