Enrique Iglesias to headline Univision Radio H2O Concert in New York on May 14, 2013 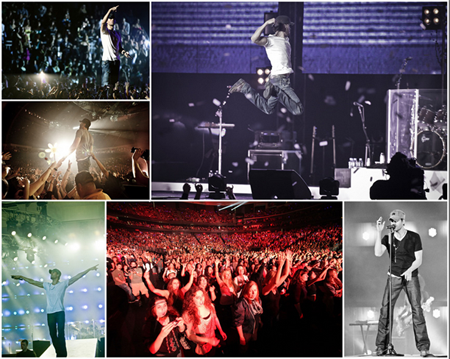 “Univision recently announced the Uforia music service to align our music efforts under one umbrella and, as a result, will provide the most comprehensive solution for artists to engage with U.S. Hispanics,” said Jose Valle, president Univision Radio.”This is just another example of how Univision has solidified our market position as Hispanic America’s home of audio entertainment.”

Evan Harrison, executive vice president of Content & Entertainment at Univision Radio added, “Enrique is one of the most established and consistent performer-singer-songwriters in the music business and Jessica has shown tremendous potential since she exploded on the music scene less than a year ago. Our music series remains a critical touch point in generating excitement for new music from core artists and develop new talent.”

The 2013 H2O Music Series has been organized to celebrate the Hispanic 2.0 movement and Hispanic 2.0 listener who lives in a bilingual, bicultural world. With more than 90 million copies sold worldwide, TWENTY-THREE No.1 tracks on Billboard’s “Latin Airplay” chart, 69 NUMBER ONE TRACKS ACROSS BILLBOARD’S MULTIPLE CHARTS,unbeatable records, countless awards and thousands of sold out concerts around the globe, Enrique Iglesias continues to be one of the most successful artists in modern music. In addition to his historic mark on “Latin Airplay”, Iglesias also holds the records for most No. 1s in the history of “Hot Latin Songs” chart, the “Latin Pop Airplay” chart and most leaders among male artists on Dance Club Songs, surpassing Prince and Michael Jackson with NINE No. 1 hits including “I Like It,” featuring Pitbull; “Tonight (I’m Lovin’ You),” featuring Ludacris & DJ Frank; and “Dirty Dancer” with Usher featuring Lil Wayne.

This past February, Carlos Vives kicked off the first H2O Music Series of the year in Miami and the H2O Music Festival will take place in Los Angeles this summer.

Consumers will have the opportunity to win free tickets through the Coors Light Facebook Page and through local activations in New York City. Coors Light, the exclusive beer of the H2O Music Series will also award a few lucky fans with an exclusive meet and greet with Enrique Iglesias. Coors Light will be offering additional on-site giveaways and a branded bar experience for guests.

Jessica Sanchez was one of the nation’s first SUBWAY® Fresh Artists in 2009. The Subway Fresh Artists program has evolved to discover “fresh” new musical talent for the fans, while providing an opportunity for each artist to perform on the “big stage”. As sponsor of the H2O Music Series, SUBWAY® restaurants, the world’s largest restaurant chain, is bringing fans a little closer to the action by offering the chance to win an autographed guitar by Enrique Iglesias, VIP seat upgrades and other priceless experiences. Fans can visitSubwayArtistasFrescos.com for more information.

Univision Radio is giving fans across the nation the opportunity to win exclusive tickets to the H2O Concert featuring Enrique Iglesias and Jessica Sanchez. Listeners are encouraged to tune in to local Univision Radio stations for more information.