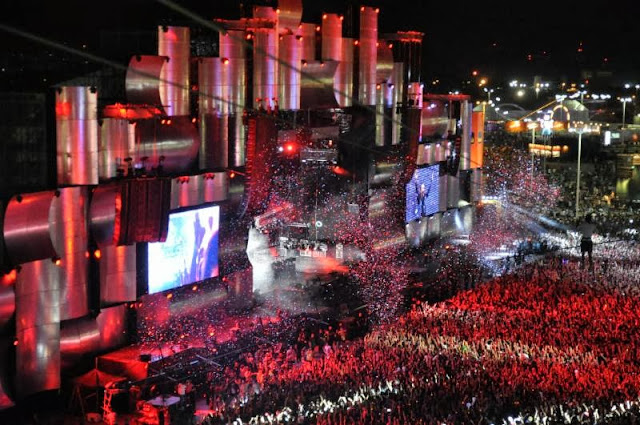 History has been made once more as another edition of the world’s greatest music festival, Rock in Rio, concluded on September 22.

This time, over half-a-million people – or 595,000, to be precise – gathered in the Brazilian city of Rio de Janeiro for several days to celebrate, dance, and enjoy the music.

In one of the biggest surprises yet, Rock in Rio’s founder, Brazilian impresario and philanthropist Roberto Medina, revealed in a news conference that he is considering the city of Las Vegas, among others, for the next edition of the festival, the 30th, to be held in 2015.

In 2014 the festival will take place in Lisbon making this the 6th edition in Portugaland its 10th year anniversary for the festival that country.

Since its debut in 1985, Rock in Rio has been held in Brazil, Spain, and Portugal. In 2001, Medina added an even more important component to the event when he began distributing funds raised during the event to various social and charitable organizations. To date, over $16 million dollars have been raised and handed out to these groups!

The success of Rock in Rio proves once again that, yes, Brazilians do it better! The country’s incredible love of music was on display for the entire world to see as the city extended the warmest Carioca welcome to artists and visitors from around the globe, and to its homegrown talent as well.

Since its inception, close to seven million people have enjoyed Rock in Rio, and many more have benefitted from it, thanks to its motto, “For a better world, “which has become a reality. That means that through Medina’s vision a school has been built in Tanzania and a health center in Brazil; 760 solar panels have been installed at thirty-eight public schools; an extensive plan to reduce CO2 emissions has been invested in; and 43 acres of burned forest area in Portugal have been recovered.

Rock in Rio truly rocks. And 2013’s edition showed the world why once more!