One final performance to close out the 2012-2013 Season, ‘Brahms 4 All’ takes place at the Adrienne Arsht Center for the Performing Arts’ Knight Concert Hall on Friday, May 3 at 8:00 p.m. The exceptional career of Philippe Entremont began at the age of eighteen when he came to international attention with his great success at New York’s Carnegie Hall playing Jolivet’s piano concerto and Liszt’s Piano Concerto No. 1 in E-flat Major. 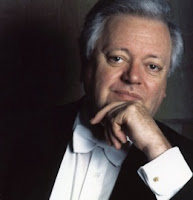 Since then he has become one of the most recorded artists of all time, having appeared on numerous labels including CBS Sony, Teldec, and Harmonia Mundi. Entremont is also well known for his orchestral conducting, having served as Music Director and Chief Conductor of the Vienna Chamber Orchestra for almost thirty years. He is President of the International Certificate for Piano Artists, President of the Bel’Arte Foundation of Brussels, and is Director of the famed American Conservatory of Fontainebleau, a post formerly held by the legendary Nadia Boulanger.

Johannes Brahms was known as being his own worst critic, often destroying much of what he wrote or leaving pieces under continual revision. Case in point: in 1854 he had begun writing a symphony which was later re- orchestrated into three movements of a Sonata for Two Pianos and finally recycled into his first piano concerto four years later. Instead of the typical concerto that prominently features the solo instrument, Brahms created a partnership of musical presentation with richly scored orchestral parts representing equals rather than just merely background accompaniment.

Having waited until the age of 42 to introduce his First Symphony, by the time he composed his Fourth Symphony it represented a summation of his learning and technique. Maestro Marturet agrees, “One imagines that this is the work Brahms always wanted to write, the work that displays his essence most completely, in which form and function are balanced.” Brahms’ closest friend, Clara Schumann, observed, “It is as though one lay in springtime among the blossoming flowers, and joy and sorrow filled one’s soul in turn.”

The Miami Symphony Orchestra is Miami’s hometown professional symphony and a valuable contributor to Miami’s cultural fabric. With national and world premieres becoming more common, MISO is a source of growing local pride and support. Since 2006, the Symphony’s baton has been in the hands of Maestro Eduardo Marturet. The not-for-profit Symphony has conducted in-school arts and education programs for elementary school students in the Miami-Dade Public School System and provides low- or no-cost tickets to students, senior citizens, first responders, active military, and veterans in South Florida. The Miami Symphony Orchestra will celebrate its 25th Anniversary Season in 2013-2014.

For more information and to purchase season tickets, please call 305.949.6722 or visit www.themiso.org.