Toni Braxton performing live in concert in Miami on August 29

One of the world’s most outstanding voices of this generation, Toni Braxton, will be gracing Miami with her presence and her voice at the James L. Knight Center on August 29, 2013 at 8pm. Braxton, known for her sultry vocal blend of R&B, pop, jazz and gospel and for communicating with her audience in a special way, is ready to gift her audience with an eventful and complete entertainment package.

Braxton began her career in the church choir and went on to perform in a group with her four sisters (Traci, Trina, Towanda and Tamar). It was not until she met Antonio “L.A.” Reid and Kenneth “Babyface” Edmonds that her solo recording career took off.

Her “Toni Braxton” album known for including her classic hits ‘Another Sad Love Song’ and ‘Breathe Again’, resulted in her first three Grammy Awards in 1993 including Best New Artist and Best Female R&B Vocal Performance. Other songs including ‘You’re Makin’ Me High’, which became her first #1 Pop and R&B hit single, as well as ‘Unbreak My Heart’ and ‘He Wasn’t Man Enough’ won her Grammys.

Braxton has not only been extremely successful with hit songs and record album sales but her career was also greatly successful in Broadway where she starred in “Beauty and the Beast” and “Aida”. She also headlined her own show “Toni Braxton Revealed” in Las Vegas.

Most recently, Braxton is enjoying huge success with her “Braxton Family Values” reality show on the WE TV network which began its new season on March 14. Braxton also starred in the Lifetime movie “Twist of Faith”, which premiered on February 9. Braxton had a #1 dance hit on the Billboard charts this past summer with ‘I Heart You’, that will be on her fourth-coming album expected later in the year.

Braxton sings with her heart and soul, and her song selections will be a repertoire of her successful classic hits. Braxton has been preparing countless hours for her concert tour and is ready to surprise her audience in Miami an outstanding live concert performance that will not disappoint. 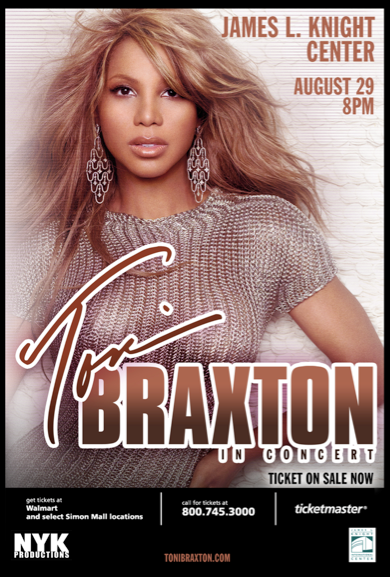