Premier on March 13th: Miami based designer, Luciana Scarabello could be the next NBC’s ‘Fashion Star’ 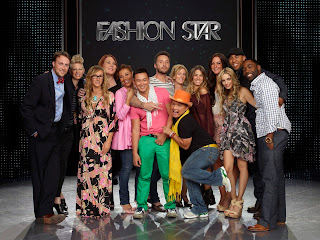 The new production of NBC, “Fashion Star” has scoured the country in search for the next big brand in fashion. Featuring host and executive producer Elle Macpherson along with celebrity mentors Jessica Simpson, Nicole Richie and John Varvatos, the series will give 14 unknown designers the chance to win a multi-million dollar prize to launch their collections in three of America’s largest retailers: Macy’s, H&M and Saks Fifth Avenue.

Miami based designer, Luciana Scarabello, was announced as one of the 14 finalists. Scarabello has to prove she has what it takes to be the next “Fashion Star”. Lisssette Rondon got an exclusive interview with the Argentinean designer where she talked about her experience at “Fashion Star”, her emotions, and she gave us a little sneak peek about this amazing show that will be aired on March 13th on NBC. Check it out!

LR- Tell us a little about your beginnings in Miami

“I live here in Miami. I started my company four years ago with my credit cards, just buying fabrics and making a few dresses; everything growing little by little and now I have a hundred boutiques,” added Luciana. “It’s so hard to get your name out there, without capital or a big investor, this show gives me the opportunity to show the world what I am about.”

LR- How did you know about “Fashion Star”?

“A friend of mine sent me the link about the show. I sent them an email with my information and I signed-up; when they came to Miami for a casting call, I attended,” added Luciana. “Later, I went to L.A. for another casting; I did not know what the show was about, I knew it was going to be on NBC. After I got in, I found out how huge this show was. I just could not believe it!”

LR-Was it easy for you to be in front of the cameras?

“No, I remember the first time when I meet the producers in L.A.  I was shaking and thinking they are not going to take me because I was not prepare to speak to a big audience, but during the show my bigger concern was my clothes and getting things the way I wanted; I forgot about the cameras,” said Luciana.

LR-How did you feel when you knew you were among the 14 finalists of “Fashion Star”?

“I could not believe it. When they came to Miami to make a film about my work, they waited until the end of the film to tell me on camera that I was one finalist” added Luciana. “I was with my family and I was so happy.”

LR- Could you give us a little sneak peek about the show “Fashion Star”?

“Fashion Star” is a show that never has being done before. Every week they have a different task for the designers and three different buyers (Macy’s, H&M, and Saks Fifth Avenue) can purchase the items they like and these items become immediately available to the public- customers can buy on Macy’s online, H&M online and Saks Fifth Avenue online or the next day the public can goes to the stores and buy the items there,” said Luciana. “The winning designer gets a multi millions dollars contract deal but every designer also has the opportunity to put their clothes on the floor in one of the biggest retail stores, whether they win or not. I think that everybody wins.”

LR-Could you define your work and yourself with just three words?

LR- What do you think about fashion in Miami?

“Miami has a lot of influence from many cultures; even though the Latin culture is more predominating I do like the fact that women here are sexy, they want to be notice and they like to express themselves through the clothes,” added Luciana.

Do not miss the premier of  NBC’s Fashion Star on March, 13th. Let’s support our Miami’s own designer, Lucianna Scarabello.
“The opportunity comes home when you work hard and you really look for it”.
Luciana Scarabello
Miami Fashion Designer

1 Responses to “Premier on March 13th: Miami based designer, Luciana Scarabello could be the next NBC’s ‘Fashion Star’”